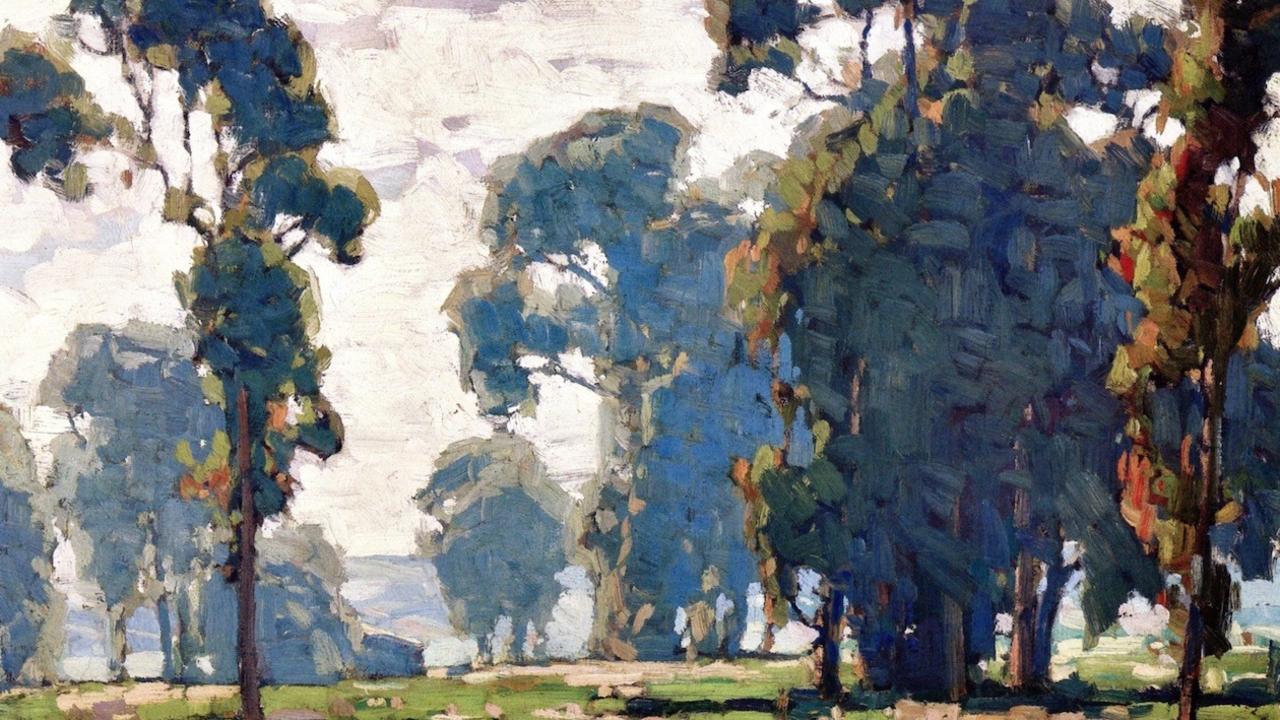 What I Learned About Painting Trees From Artist Edgar Payne

Which Is The Real One?

We are starting the new monthly learning modules soon which will look at how to paint all sorts of subjects, from trees to mountains, water to clouds, and so much more. And as we were planning out the first set of lessons - which will be on trees - I kept thinking of Edgar Payne's painting "Eucalyptus Grove". So, I decided to look it up on Google.

The funny thing was that I kept seeing different versions of his painting. I couldn't figure out what was happening, because some were slightly more colorful, some had different brushstrokes, etc. 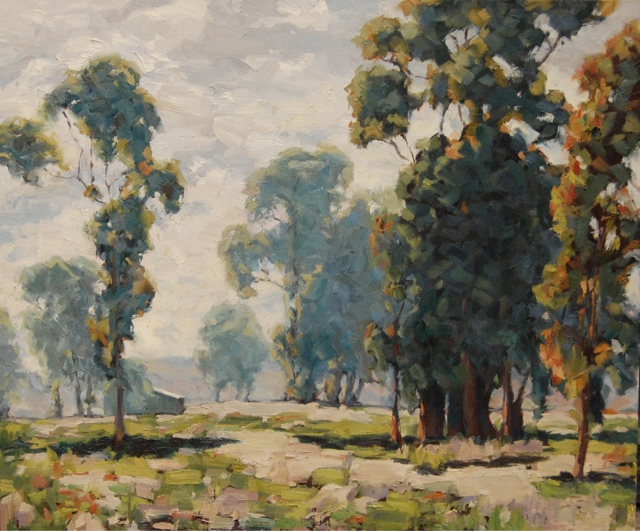 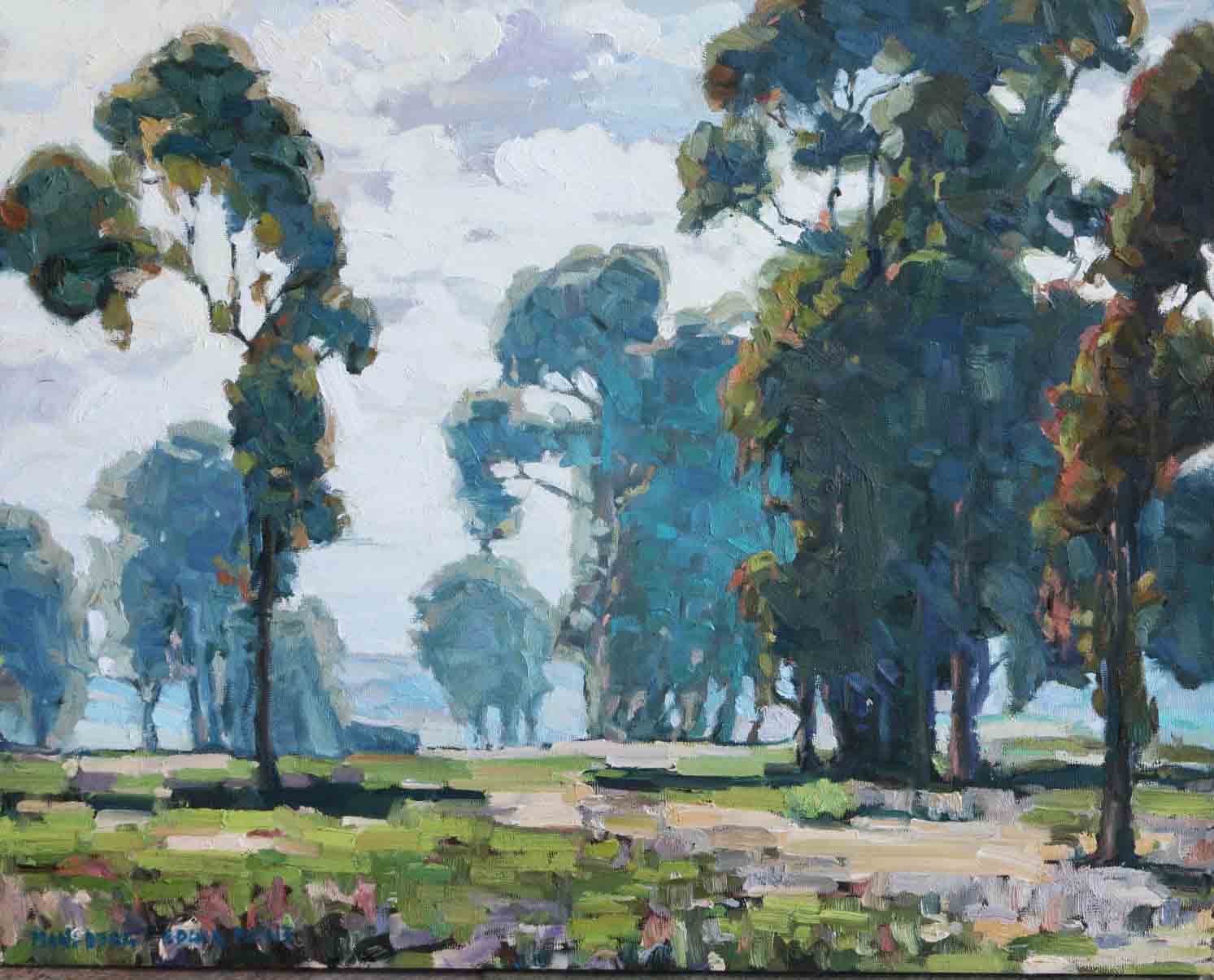 Then I realized people were doing copies of Edgar Payne's original painting. And it made me think, "Oh, yes, that is a perfect idea for us as we enter these new monthly modules!" So, that's part of what the lessons will contain - a master copy. I will find an historic artist who has painted the subject really well, and then we will take a look at what his painting can teach us. 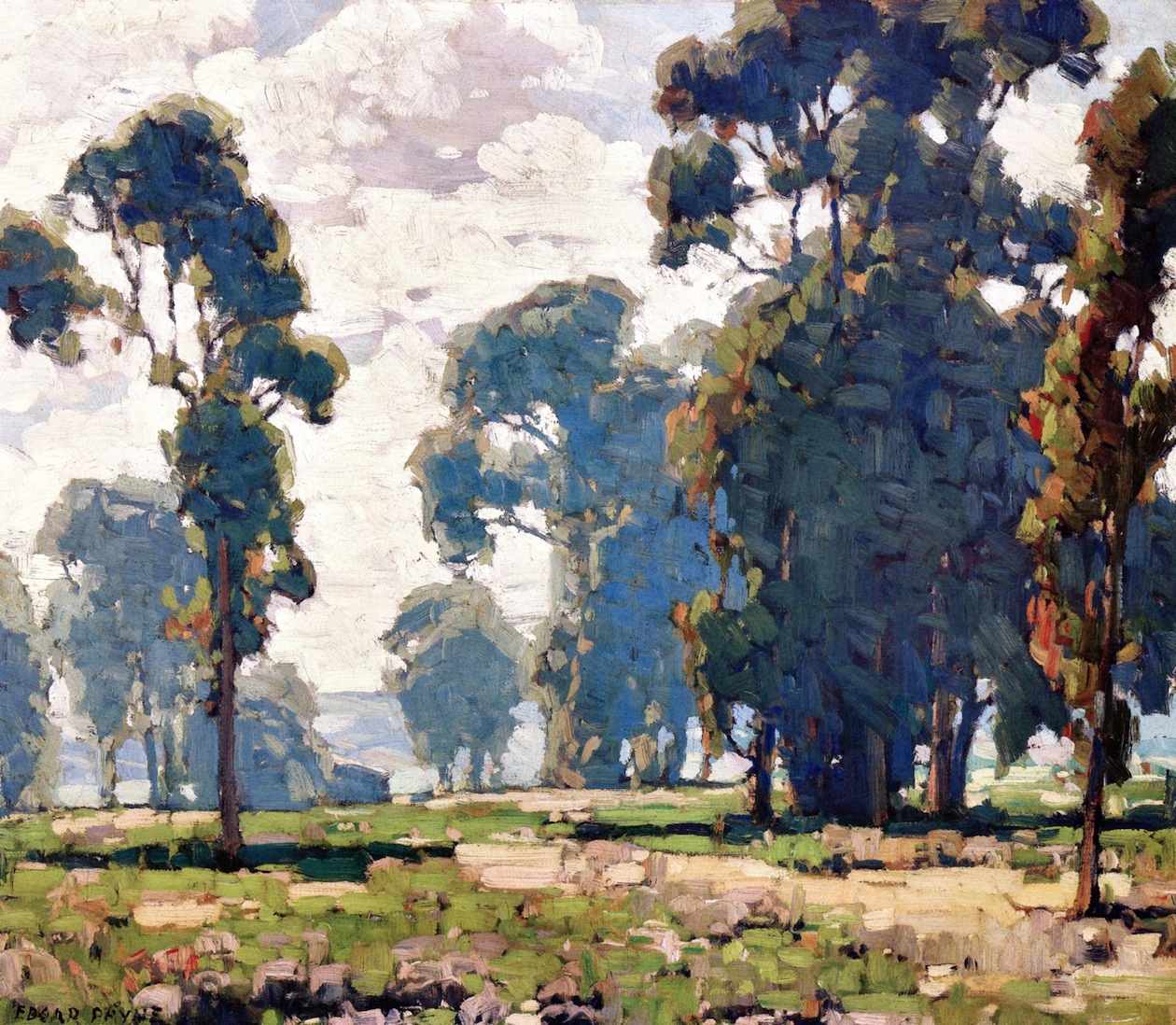 So, what I learned after copying Edgar Payne's painting were these things:

1. He used big, bold brushstrokes. I already knew that, but I had the chance to gaze at this painting for an hour, and those big, loose strokes really stood out.

2. He used the full range of values. He has an almost-white in the sky, and an amost-black in the dark accents, and that is what gives his painting such a dynamic range.

3. He's a master of conveying depth. That large value range gives him plenty of room to convey the sense of depth in his painting. The distant hills are light and muted, and they appear to be miles away compared to the more vibrant and saturated foreground trees.

I am a big proponent of learning from others, and I have to say that I had an amazing time doing this master copy. Thank you, Edgar Payne, for being a great artist, and for leaving a legacy that we can learn from. 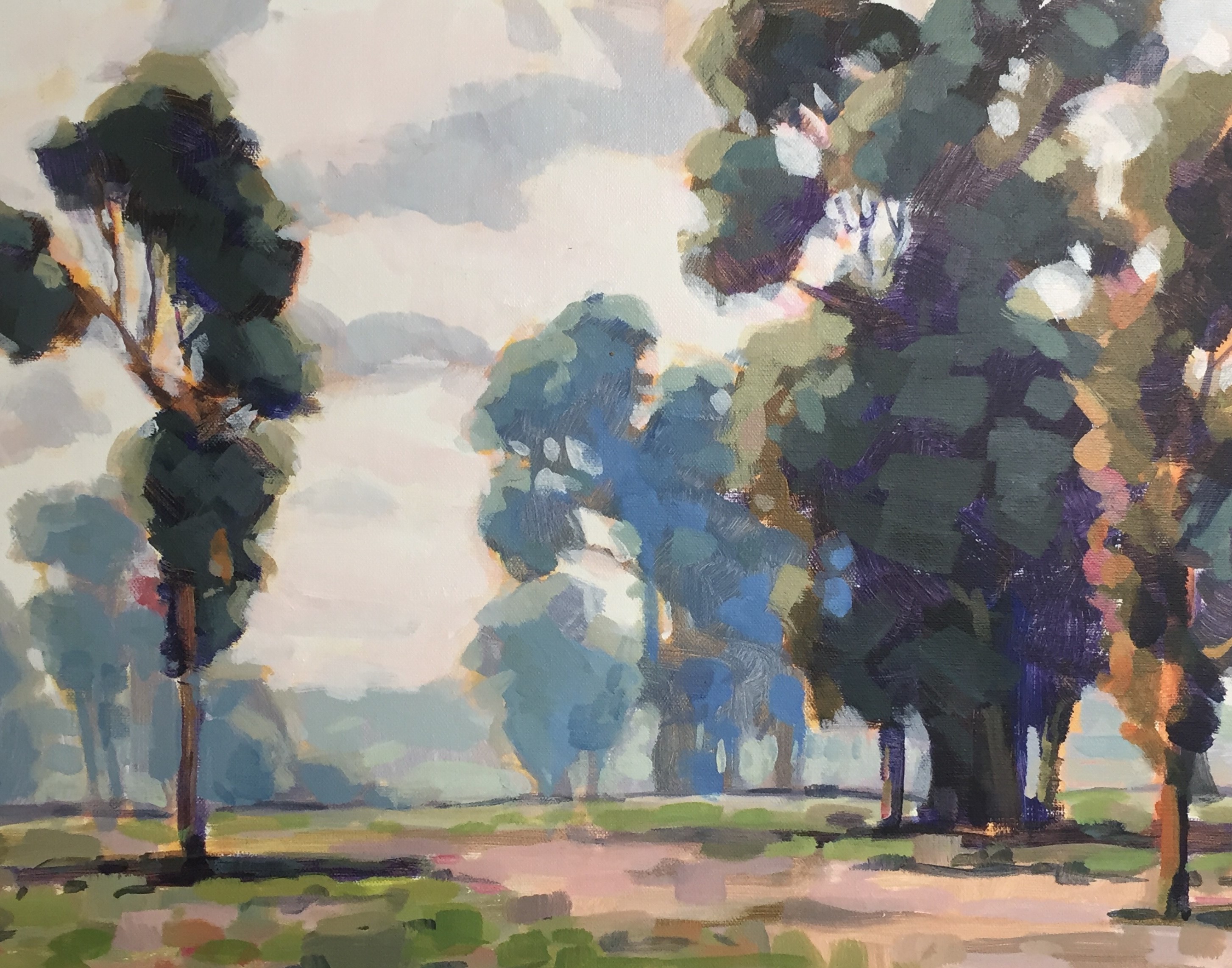 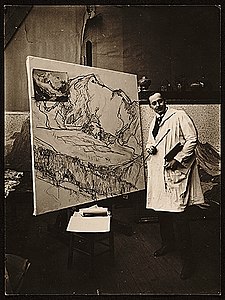 Edgar Payne was born in Cassville, Missouri in 1883 and grew up in the Ozarks. As a teenager he traveled a bit through the Ozarks, the Southeast States and Midwest, paying for those travels by painting houses, signs, murals, portraits, etc.  Eventually, he ended up in Chicago and began studies at the Art Institute of Chicago, but only lasted two weeks. Apparently, it was too restricting to him, and he preferred to learn on his own and find his own direction through practice.

He married a fellow artist, Elsie, and they had a daughter, Evelyn. While they lived and worked in Chicago for a time, most of the work he is known for came from their time in the western United States. For the most part, they lived in California, where Edgar exhibited extensively, helped start the Laguna Beach Art Association and was involved with other art organizations. But he and Elsie also traveled a lot, hiking and painting throughout many beautiful places, including a two-year tour of Europe. 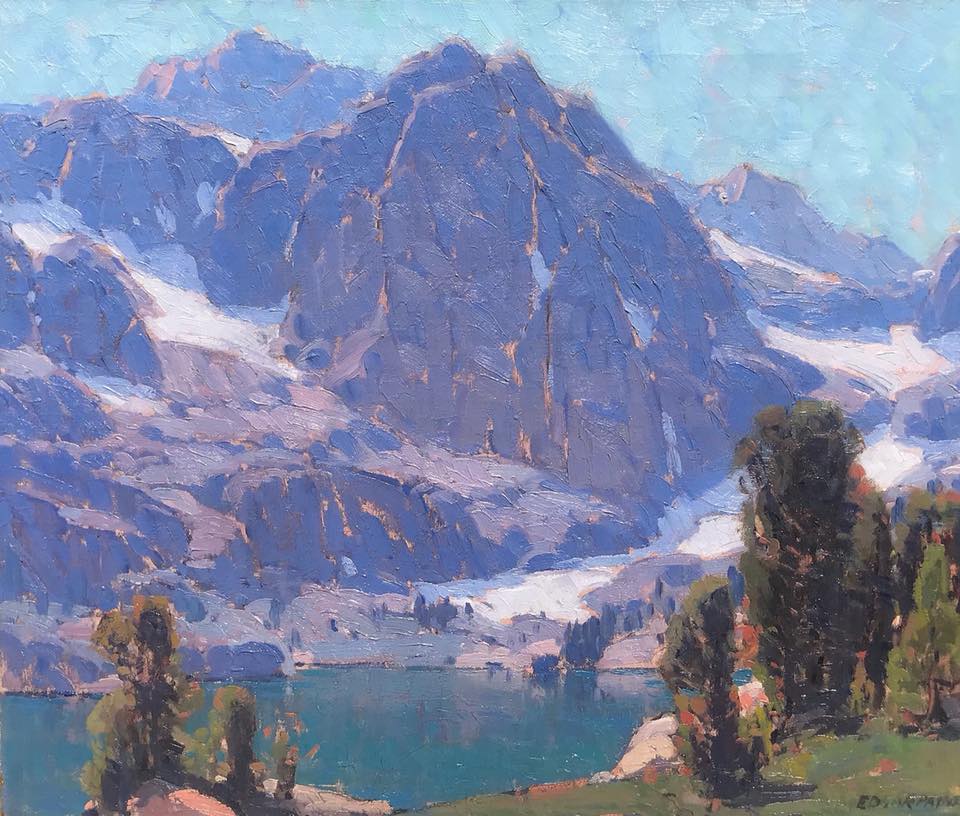 Edgar Payne painted the Sierra Nevada Mountains so much they named a lake after him!

He loved hiking and painted the California Sierra Nevada Mountains, which many believe were his favorite subject, but he could paint anything well. Some of my favorites of his are of the California coast, where he captures the water and surf extremely well. He also was well known for his paintings of the Southwest, many of which were commissioned by a railroad company. 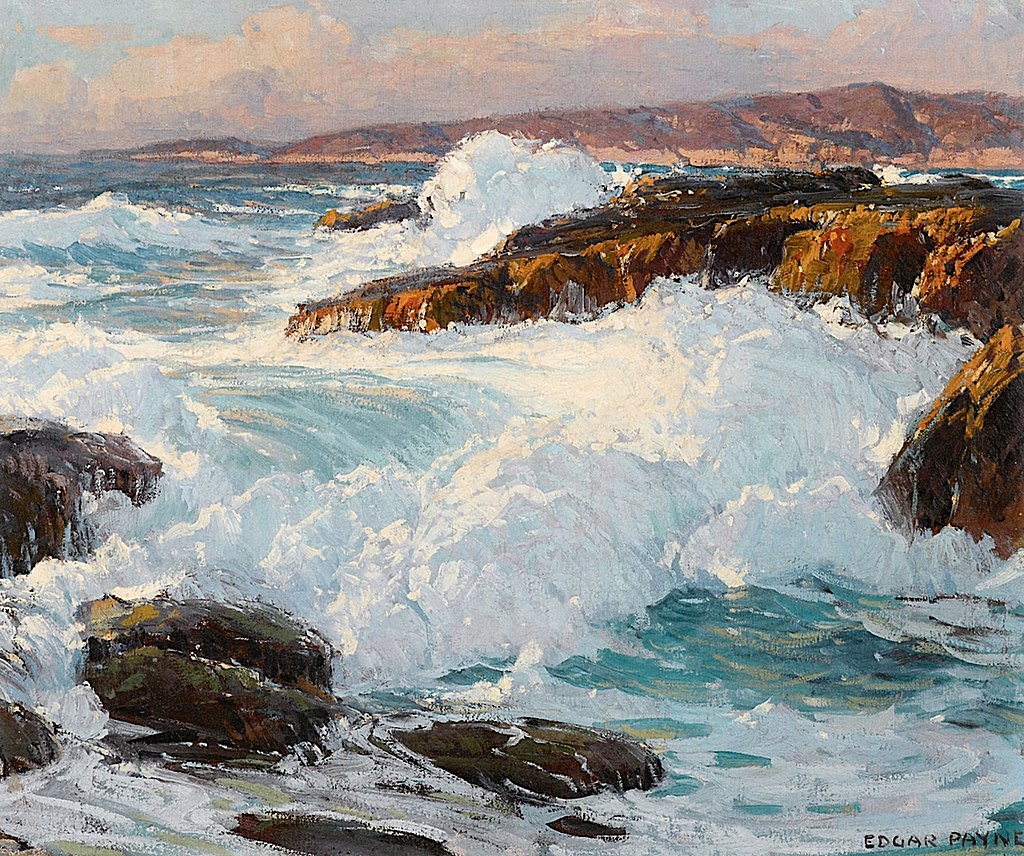 "High Surf Along The Laguna Coast"

His book, "Composition of Outdoor Painting", is one of the more comprehensive books on the subject. The writing is lengthy and not necessarily easy to wade through, but the small pictures and design drawings have been helpful to countless painters.

Edgar Payne died in April 1947, but his artwork lives on and inspires many.

If you'd like to read more about his life and work, go HERE.