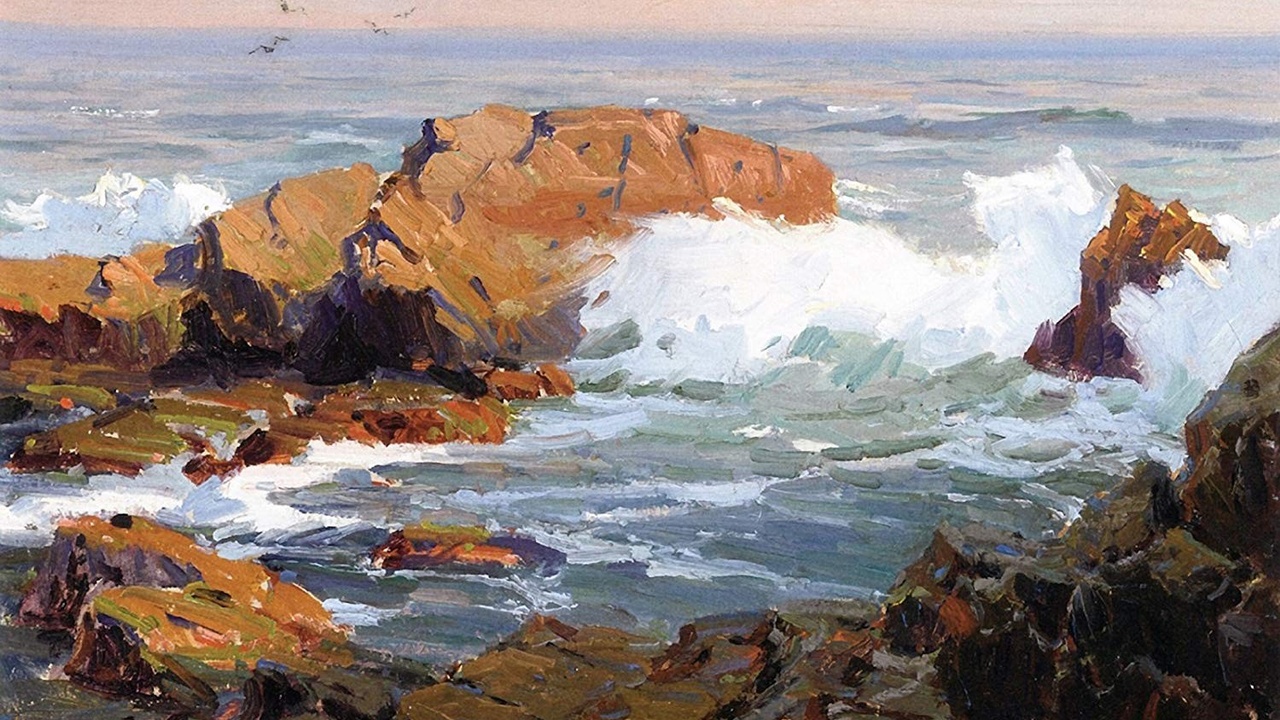 What I Learned About Painting Water from Jack Wilkinson Smith

How to paint water? It’s a good question! Water is a very difficult subject to paint. Trying to capture how light interacts with water can be super frustrating. Luckily, we can learn from those who have walked the path before us. Today we’re going to be looking at an ocean painting by Jack Wilkinson Smith.

Long ago, a great artist once said, ‘For an Impressionist to paint from nature is not to paint the subject, but to realize sensations.’ The man who expressed this thought was Paul Cezanne, a French Impressionist painter from the late 20th century.  Many years later, American artist Jack Wilkinson Smith would bring these words to life. It was exciting for me to study his work and discover better how to paint water!

I really enjoyed doing this master copy of Jack Wilkinson Smith’s ocean piece. We’ll learn more about his story in a just a bit, but for now, let’s focus on what makes his work unique, and what I tried to capture in my version of this dynamic ocean painting.

What I learned after copying this painting was:

I started my master copy with a limited but vibrant palette and began the painting with a quick sketch of the scene with my acrylic marker. I use this marker to establish the design of the piece before moving onto establishing my darkest values of the scene. This gave the canvas the base needed before toning the canvas with Quinacridone Gold. With its warm transparency, I could still see the acrylic marker lines and, of course, our dark values.  After that, I used strong brushstrokes and different values and colors for the rocks. Then I began blocking in the water. I used something called gradation, which is the transition from the dark tones used in the rocks and water closer to us, to the lighter tones used as the scene moves away from us. Finally, I focused on refining the rocks, adjusting the water, and adding the sky. I then applied another layer of white to the frothy water of the wave to make it pop.  And last but not least, I painted in a couple of free-flying seagulls!

Through all of this, remember the greatest tool we have as artists is our eyes, but we need to train them to recognize color nuances in order to express them in our painting. When we do this, we can, as Cezanne stated, create that “sensation of feeling” of one standing at that very location; on the craggy rocks, hearing the surf, and smelling the salty breeze, looking across the vast ocean. 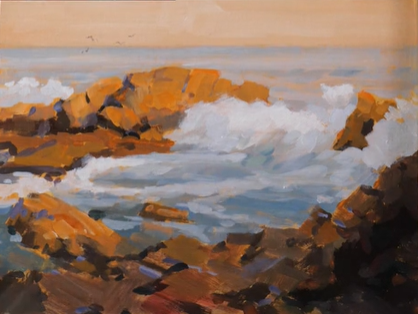 Jack Wilkinson Smith knew very well what this beautiful ocean scene we’ve been studying was like in his personal life, having been born near the ocean on February 7, 1873 in Paterson, New Jersey, and later dying in 1949 in Monterey Park, California.

Jack was born into a family that had an interest in art. His father was an artist who painted some of the decorations in the capitol building of Albany, New York. His grandfather owned an 80-acre farm, including the area we now know as Madison Square Garden. While in his teenage years, Jack studied Art at the Chicago Art Institute, as well as under George Gardener Symons in Chicago.

Jack eventually took up work as a commercial artist in Lexington, Kentucky and later went on to become a sketch artist for the Cincinnati Enquirer, studying further in his art education under Frank Duveneck.  Jack gained considerable recognition for his sketches of the front-line during the Spanish-American War.

Eventually, Jack moved westward and in 1906 he moved to Alhambra, California and settled in by the beautiful Pacific Ocean. It was here that he would establish a studio-home amongst a eucalyptus grove called “Artists Alley.” His neighbors included fellow artists Eli Harvey, Frank Tenney Johnson, and Norman Rockwell, who was a summer-resident.

After his move to the West Coast, Jack transitioned from his Midwestern watercolor paintings to oil paints. This became his main medium of choice as he focused on his new work. He found amazing subject matter traveling throughout the state and along the incredible Pacific coastline. This subject matter became the inspiration of much of his stunning impressionistic artwork.

Jack would go on to be credited for his significant part in helping to establish the Biltmore Salon. This Salon exhibited and sold paintings by many local artists. He was also instrumental in helping the formation of the “Sketch Club”, along with being an inaugural member of the Laguna Beach Art Association and the California Art Club.

During the Great Depression, Jack applied his talents in working for Pacific Outdoor Advertising.

When he died in Monterey, California in 1949, near the sea he had painted so many times, Jack Wilkinson Smith left behind a rich visual legacy for future generations to bask in and enjoy. He left behind a treasury of art, capable of instructing and teaching artists for years to come. And most importantly, he showed us all how to see. In seeing, he gave to others that allusive gift Cezanne once talked about, a sensation or feeling, that moves mankind.

My take away from studying Jack Wilkinson Smith:

And, let’s just keep going! For all of us, painting is a continual journey, and I can’t wait for you to come along with me as we grow together!