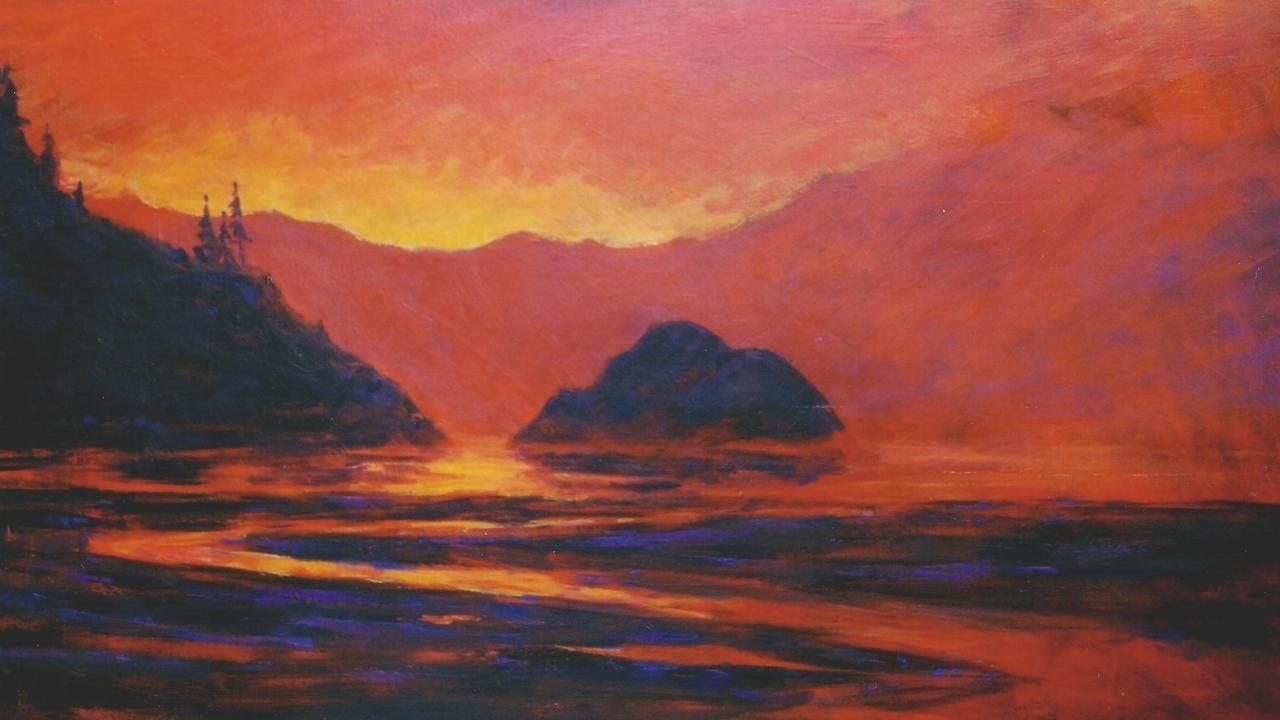 My Early Work in Acrylics - by Jed Dorsey

One of our Acrylic University members asked me recently if I could share some photos of my early work. This is my response to that request. I had to dig deep for some of these photos.

I painted in watercolors for fun while I was growing up, as my parents were both watercolor artists. In 2001, on a trip to Whistler, B.C. I saw some beautiful acrylic paintings in a gallery. The artists were Mike Svob and Robert Genn. I immediately went to an art store in Whistler and purchased my first acrylic paints. During that week long vacation, I spent hours trying out this new medium in our hotel room. I loved it. The first two paintings below are the earliest paintings of which I have record, with the first one being started that week in Whistler. 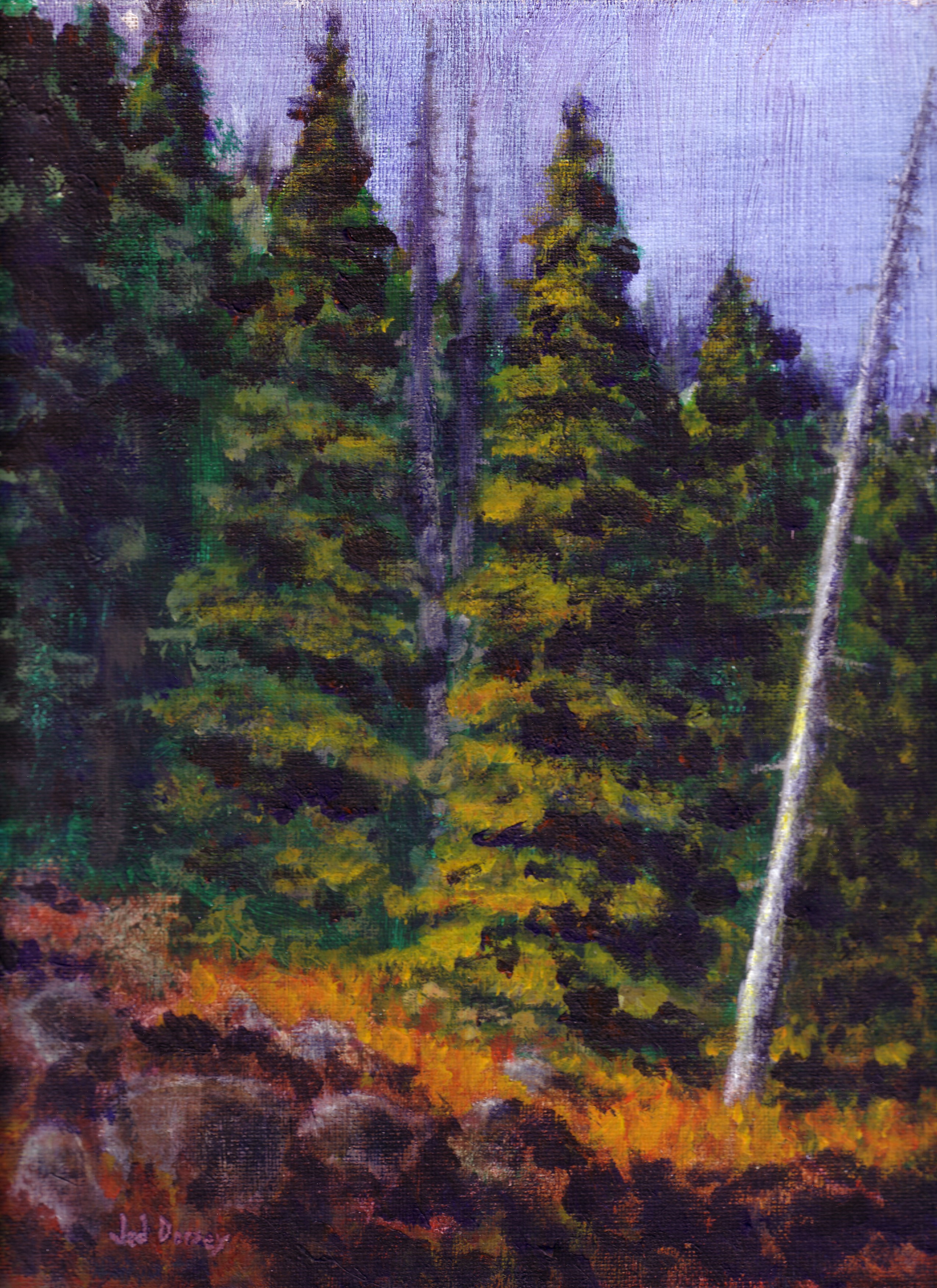 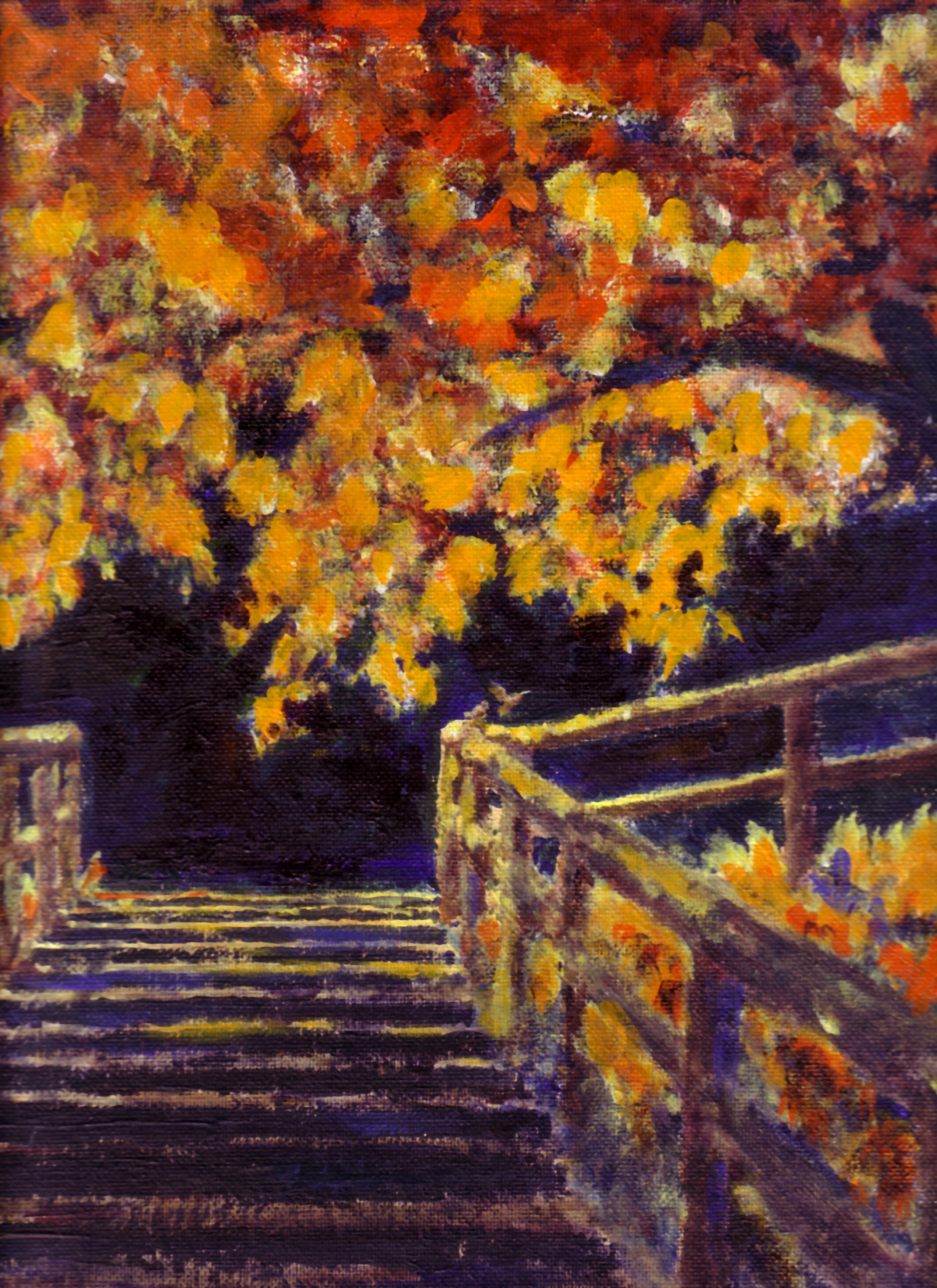 In the early 2000's, my wife, Renae, and I were involved in a Presbyterian church plant, Grace Vancouver Church. The church was located close to downtown Vancouver, B.C. We worked with a team to host art events. The arts ministry was called "Art in the City, Art in the Sanctuary" and we invited artists from the community to show their work, based on a theme. These events gave me a great  opportunity to paint and show my own work in addition to being on the team. 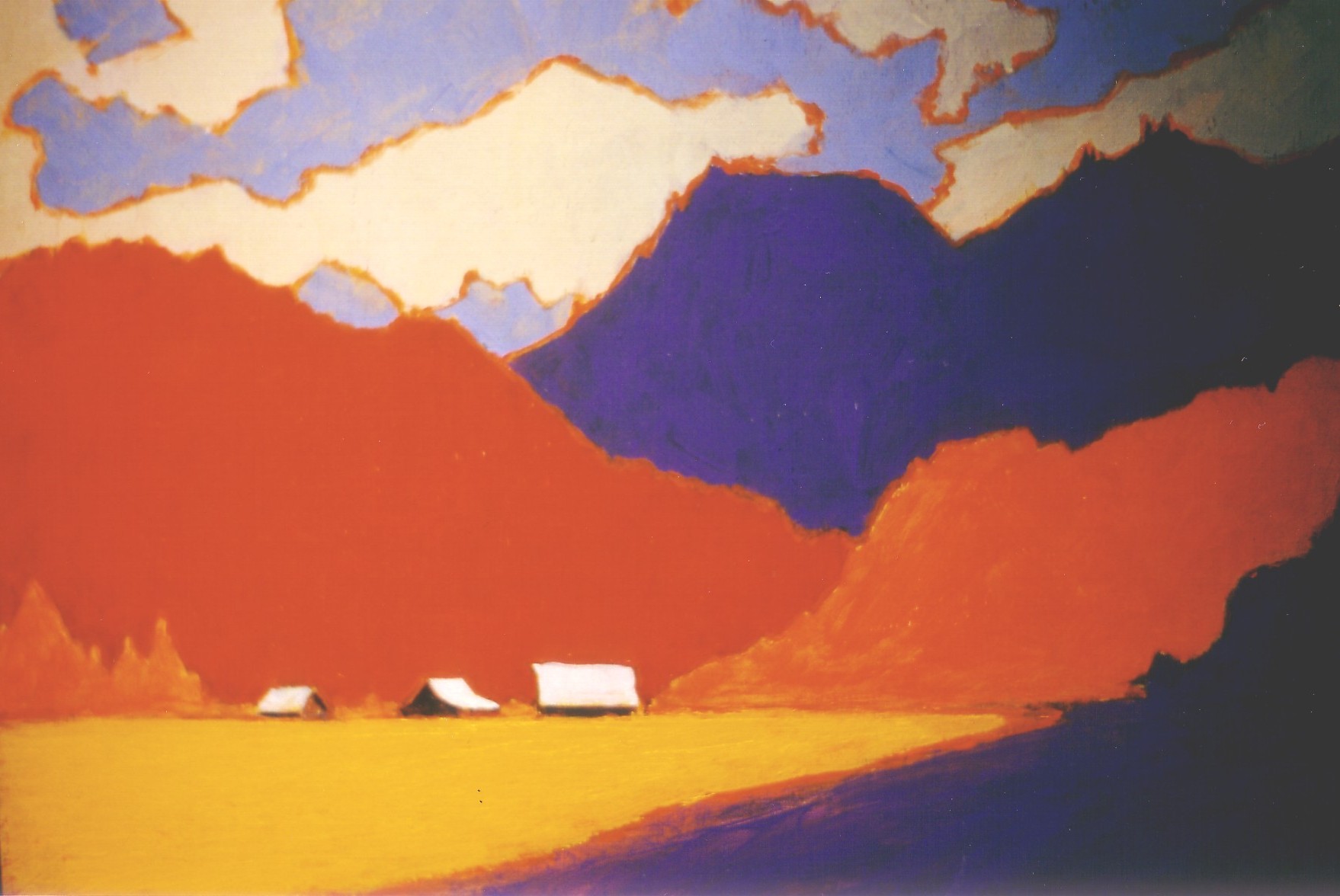 I remember being very excited to sell this painting (above) to a friend at one of our church shows. It's interesting to look back on. I always liked strong design and bold color. And clearly I was in an experimental phase during these years as these next paintings also show. 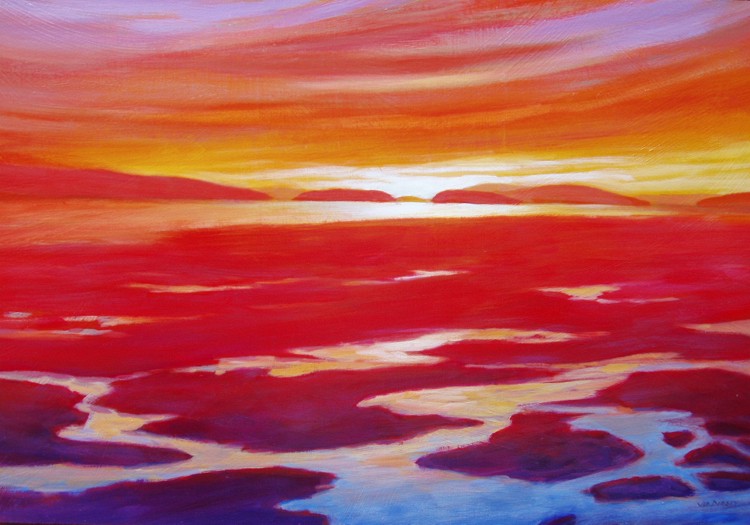 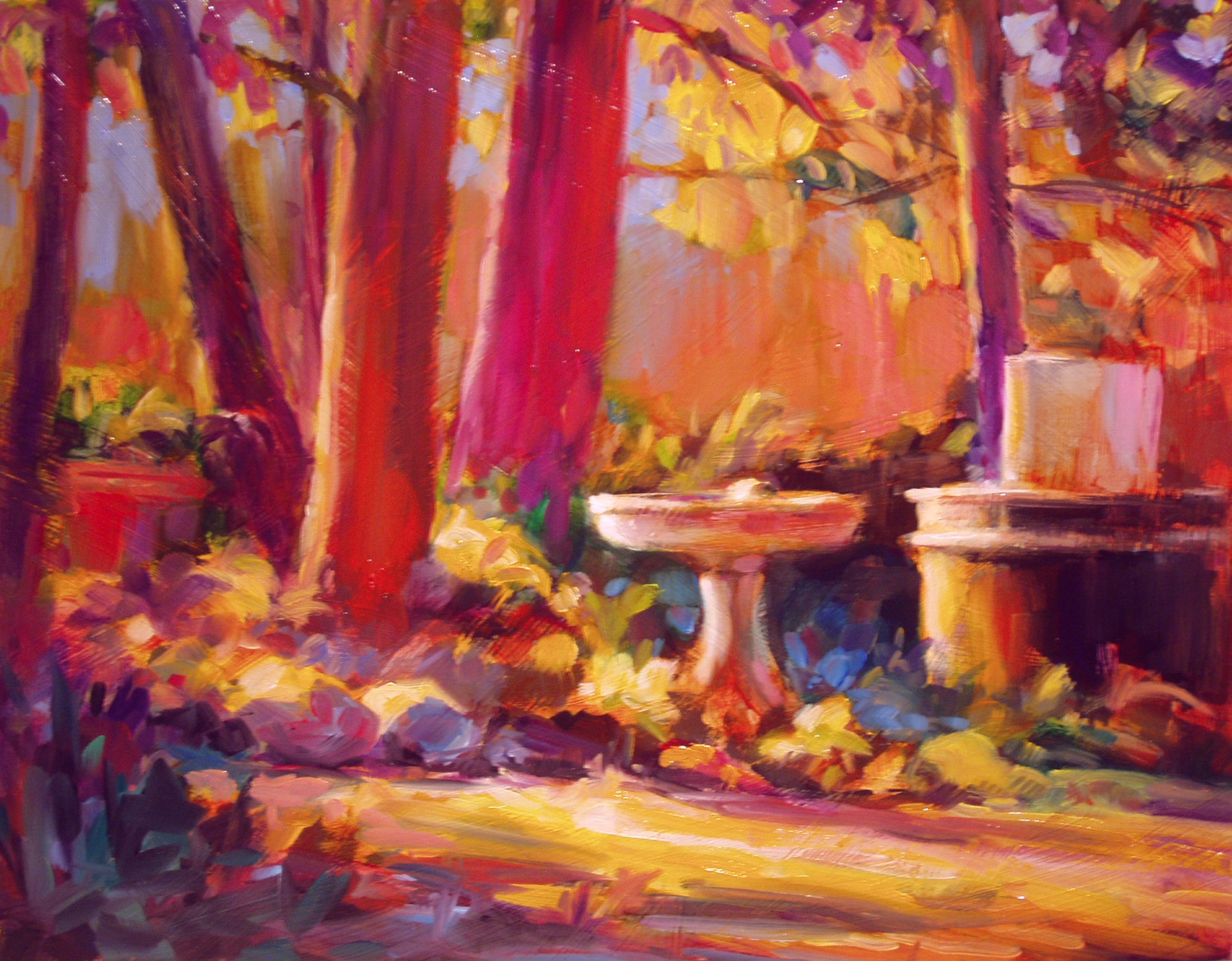 A few years later, I went to a workshop by Ovanes Berberian and he told me that I needed to use more grays. (I have no idea why he thought that ;-) ) He stopped me mid-stream when I was painting and made me simply mix various grays on my palette for an hour before I could put my brush to the canvas again. It was an assignment I will never forget, and I found it immensely helpful.

Below is a scene from a quaint and beautiful road where my sister-in-law and brother-in-law used to live on Camano Island. The tide comes in and out on a regular basis changing the view entirely. I gave this painting to my brother-in-law as a birthday gift one year. 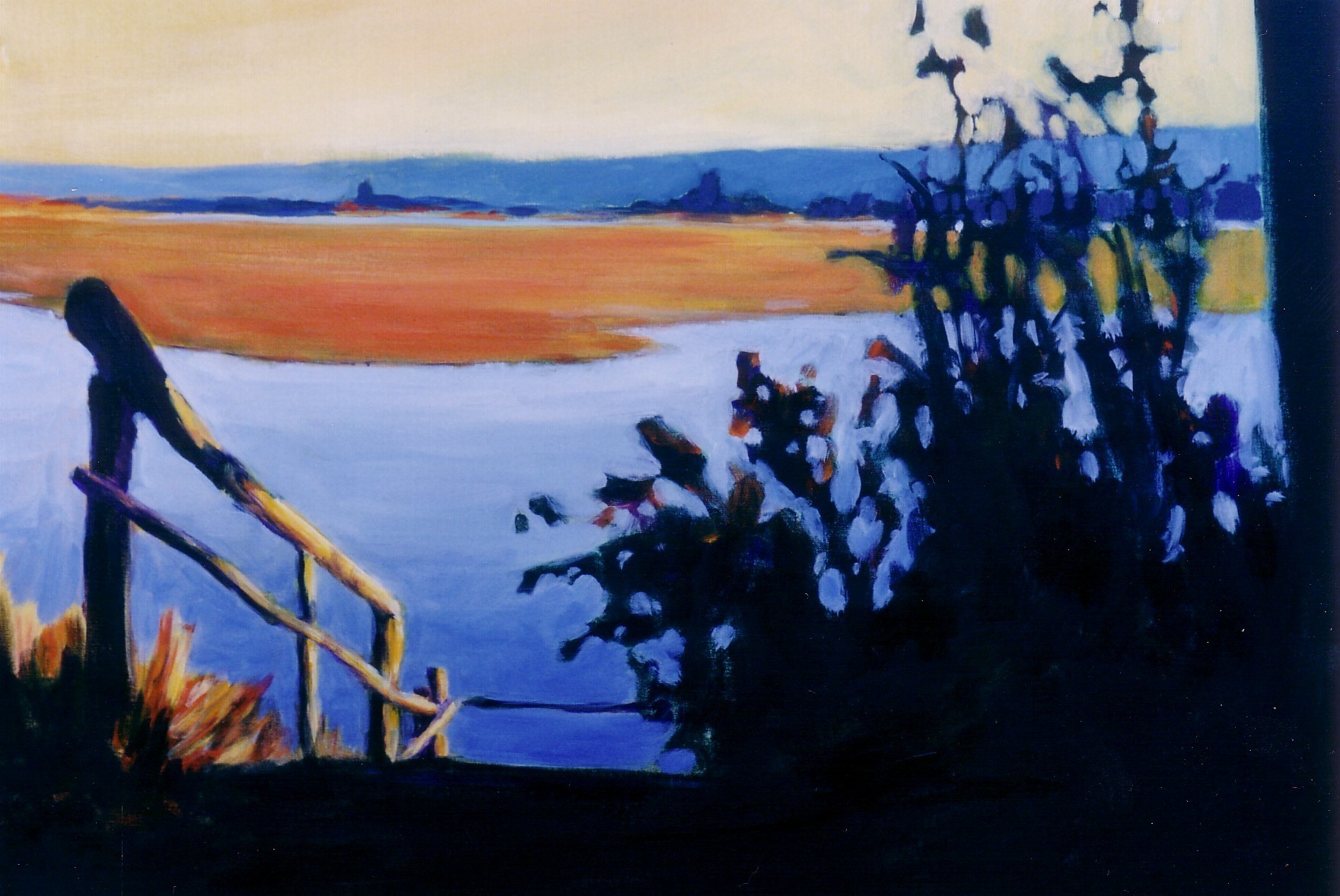 What I learned later is that I needed to bring more life into the shadows. They were essentially black when I first painted it. But after a few years of going to their house and seeing the painting, I asked if I could work on the shadow areas again, and I fixed it up. However, I don't have a photo of that.

But here are a couple more dramatic paintings with very dark shadow areas. 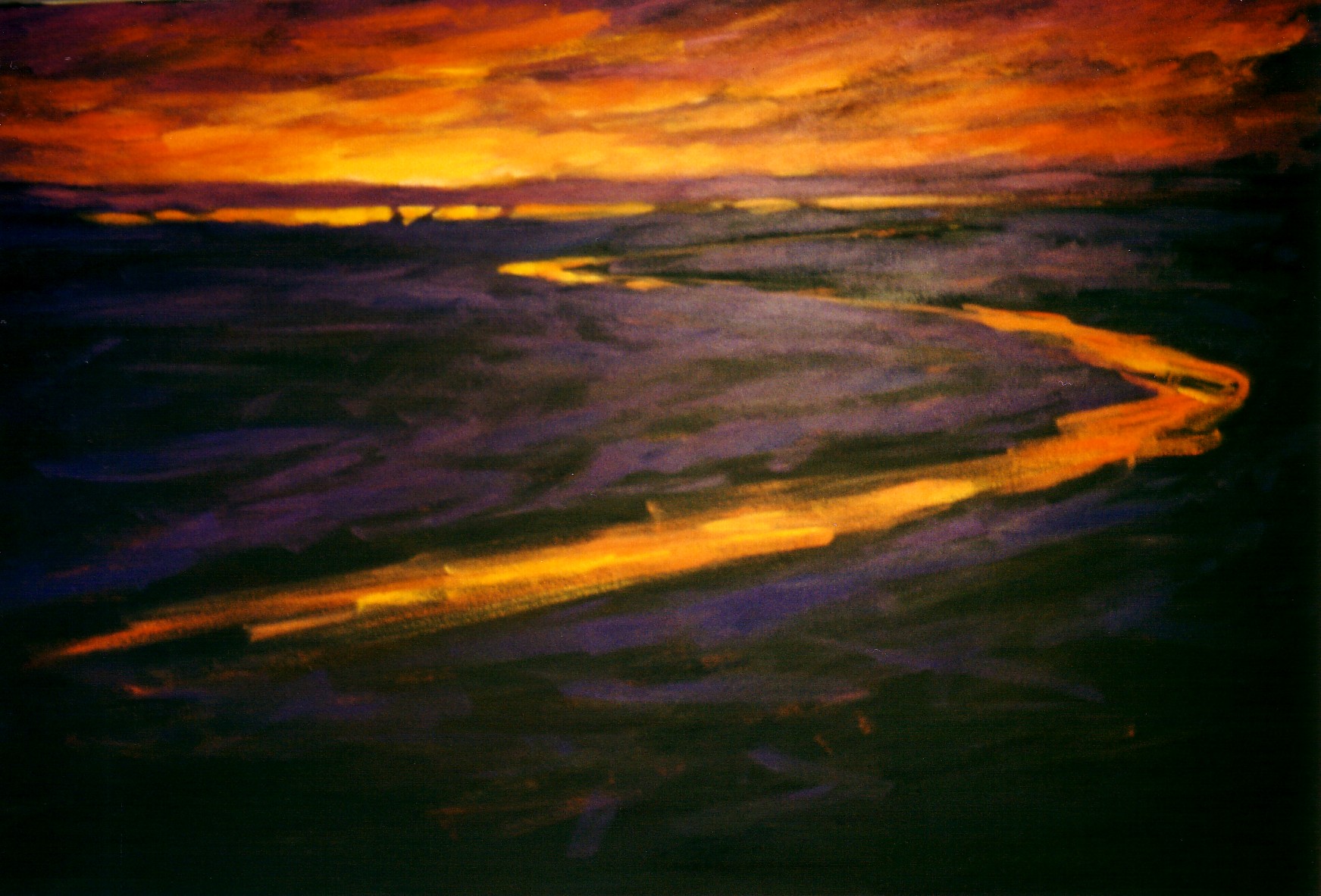 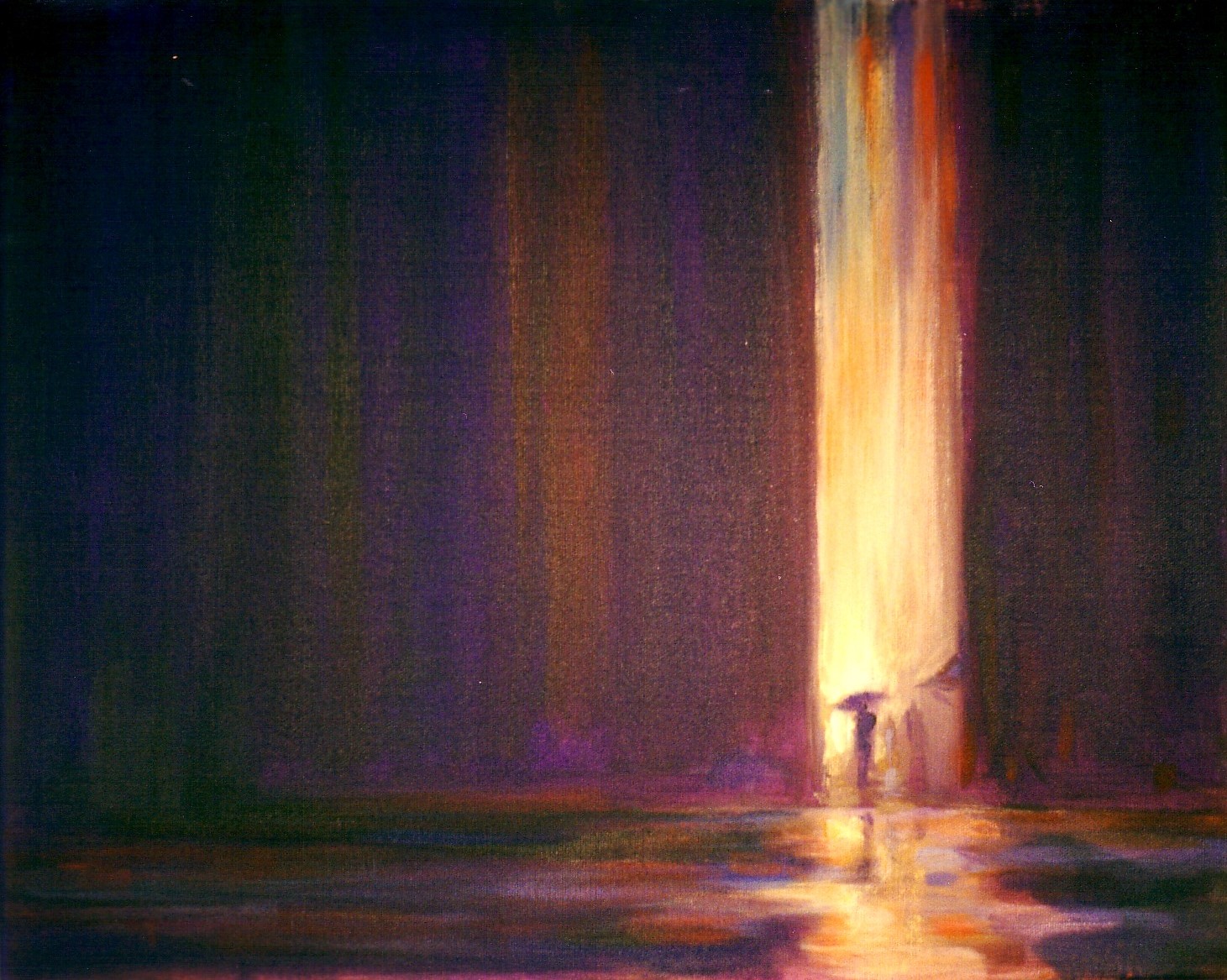 I also experimented quite a bit with texture on my canvas during the early years. I still use modeling paste occasionally, but it's usually a little less obvious. 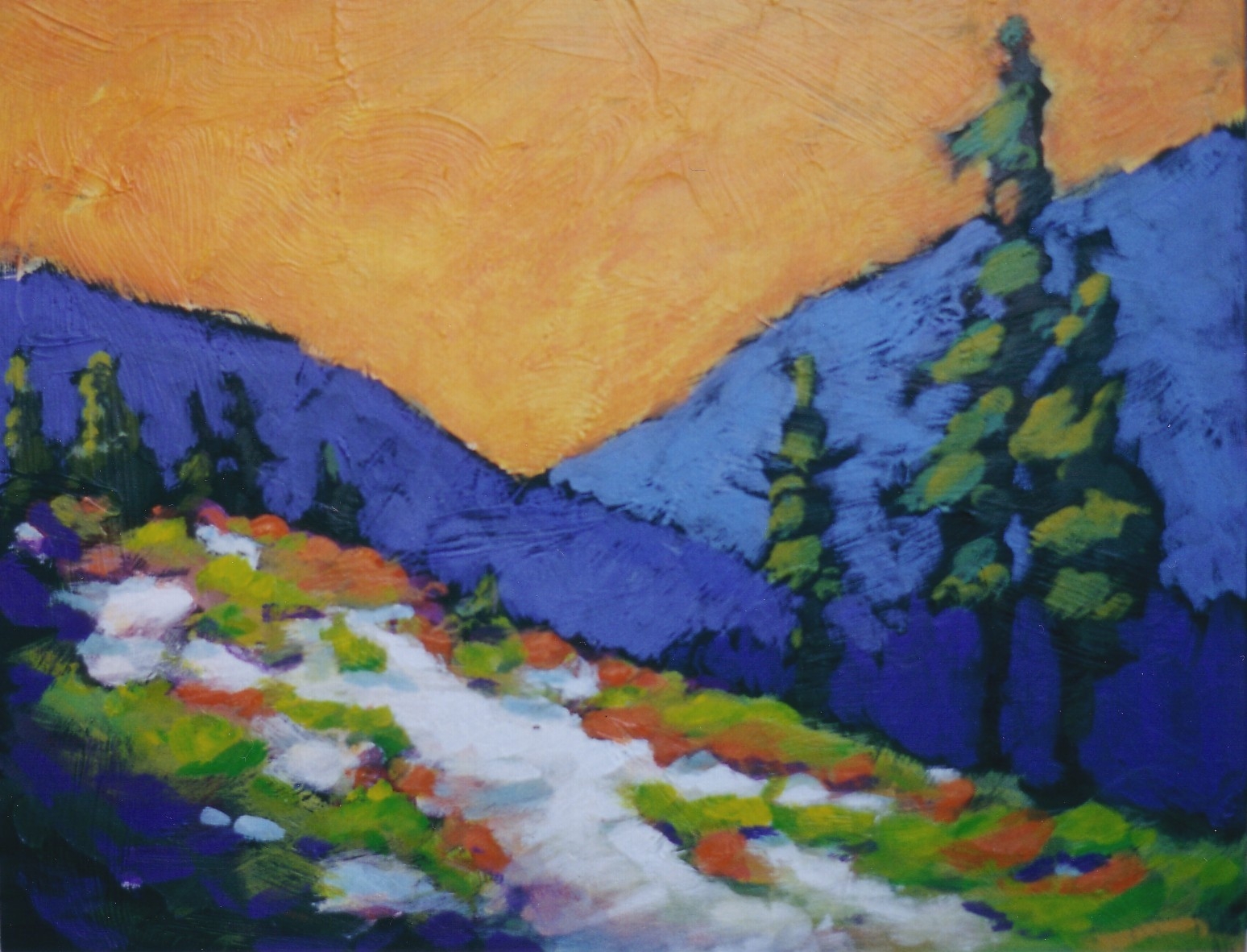 We used to go on weekend retreats at Loon Lake, a couple hours east of Vancouver, B.C. This is what we would see when driving to the retreat every summer. I loved how the light filtered across the road. Since painting this piece, I have painted many similar scenes over the years. 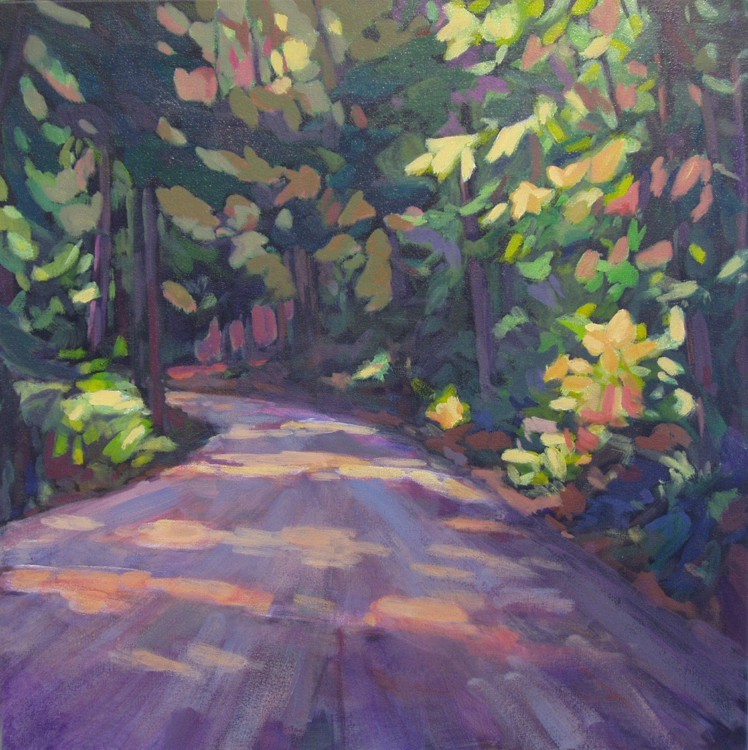 My mom and my niece, Heidi, on a family trip to Montana to visit my great-grandmother's ranch. 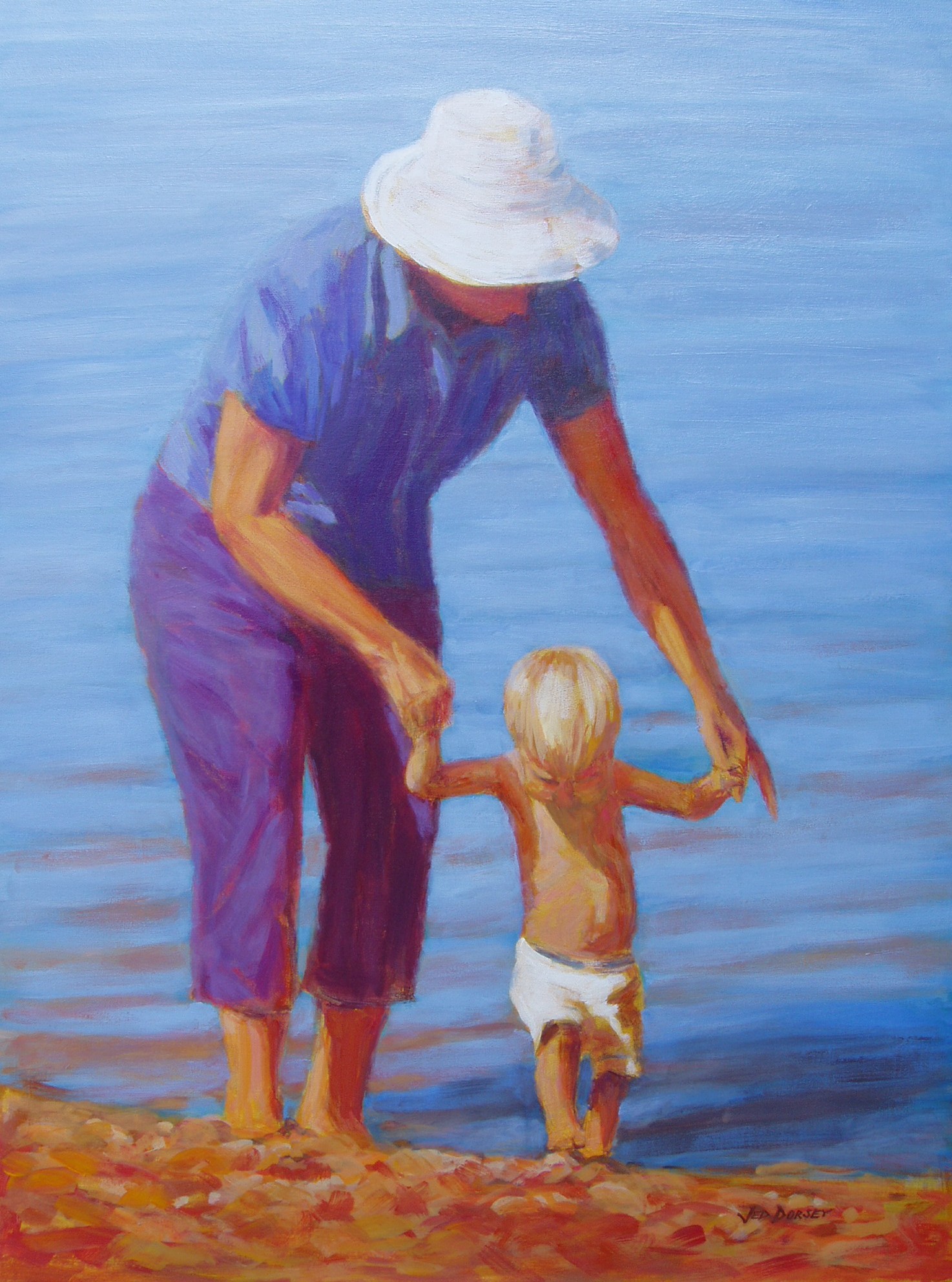 I don't often paint people now, but there was a period of time when I did. I really like this piece for the vibrancy of colors and the feeling of the social interactions. 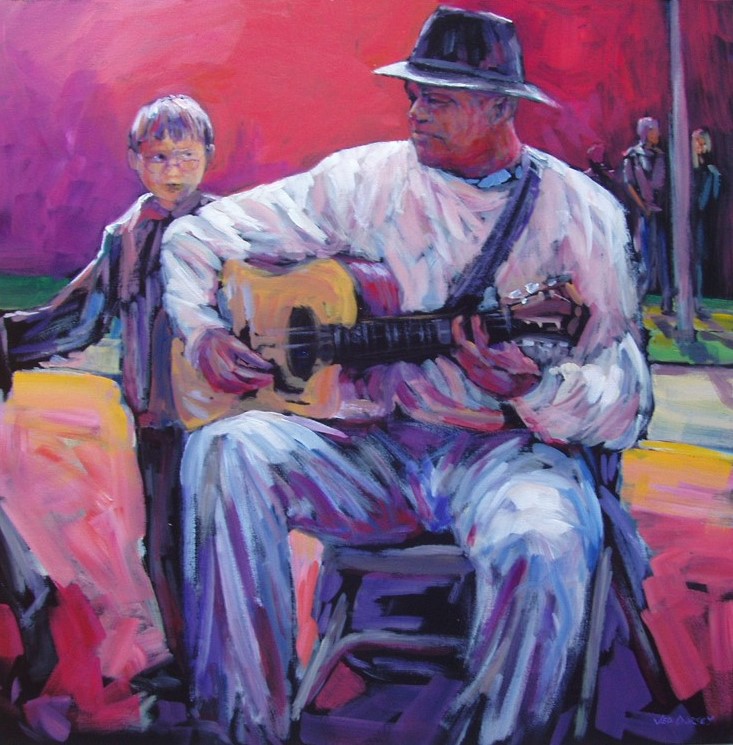 The toddler in the painting below is one of my nieces, Jackie, when she was just a little one. She is 17 now and heading to college soon. So much of my reference material is from family trips and personal experiences. 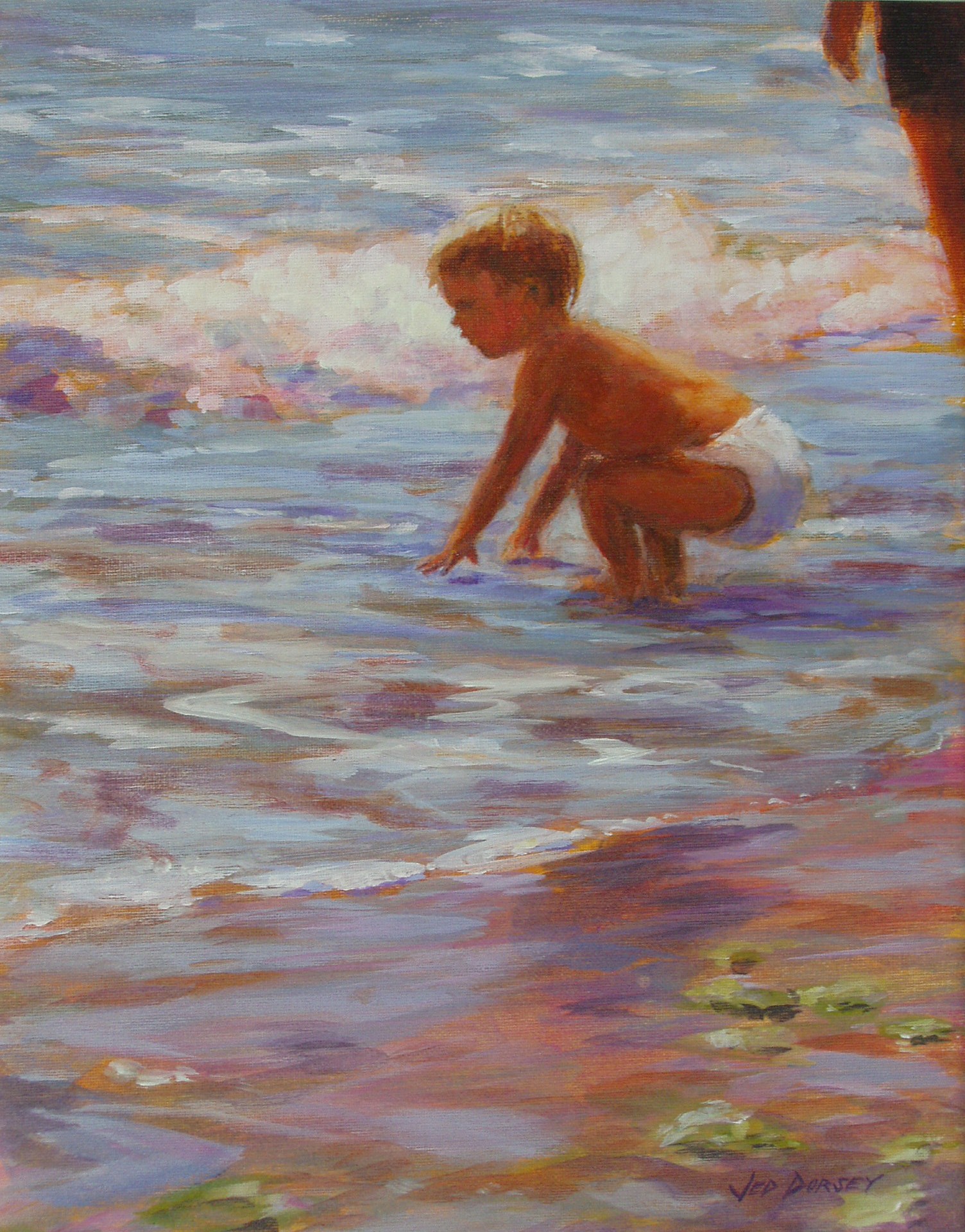 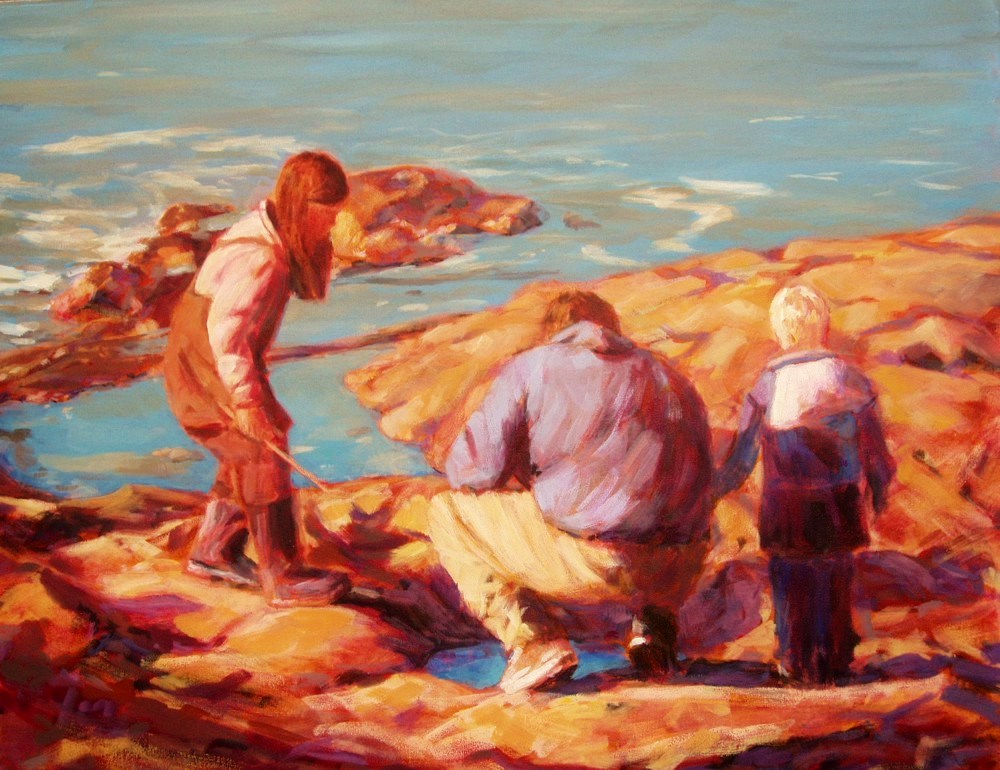 The piece below was done in a Mike Svob workshop and I was surprised at how well it turned out. I feel like it was a "fluke." It was so early on in my painting career. 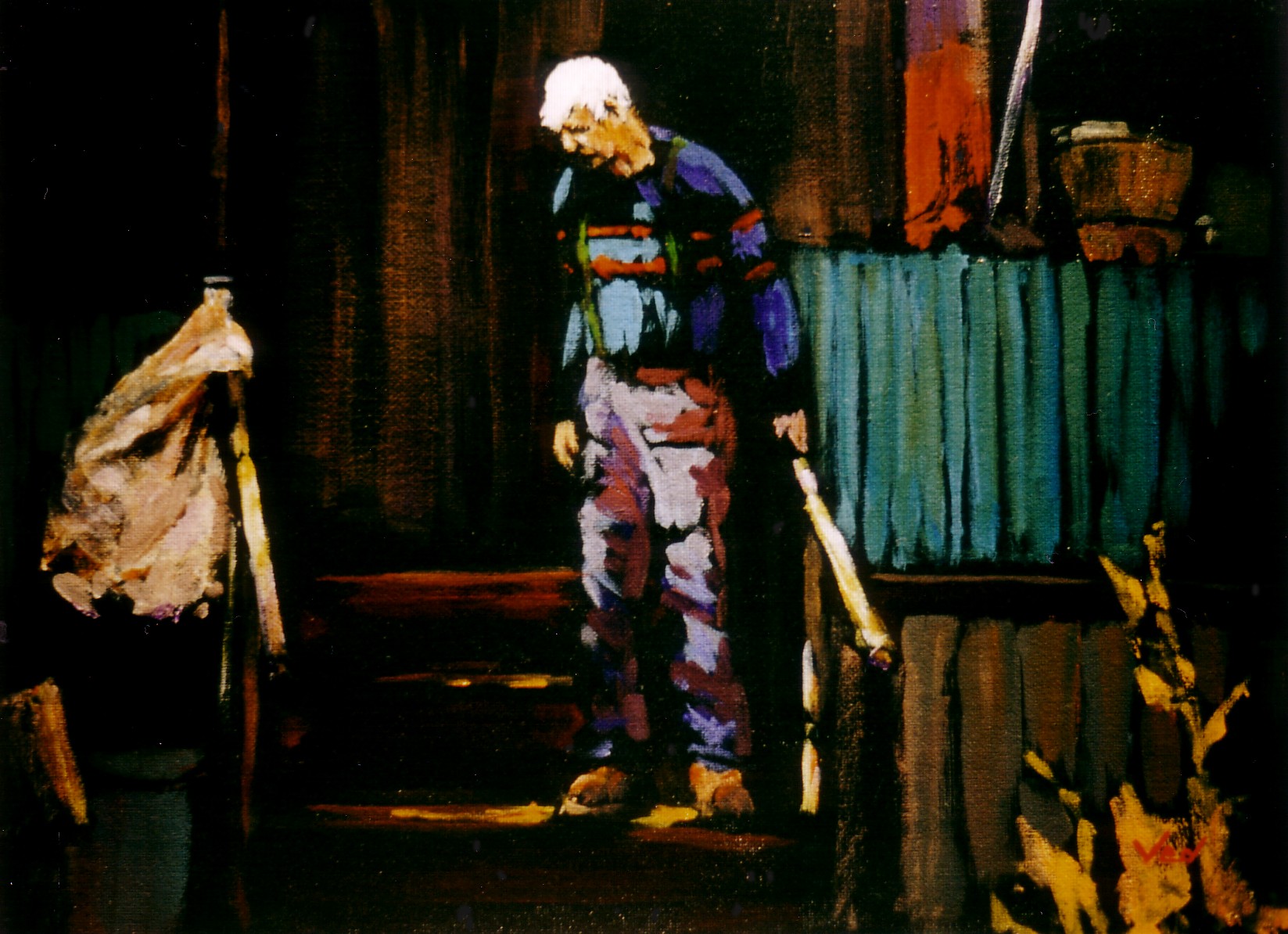 My family had a joint show at Gunnar Nordstrom Gallery in Kirkland, WA. The next two paintings were in that show and both of them sold which was thrilling. I was adopting a modern look at this time, trying to find my voice. 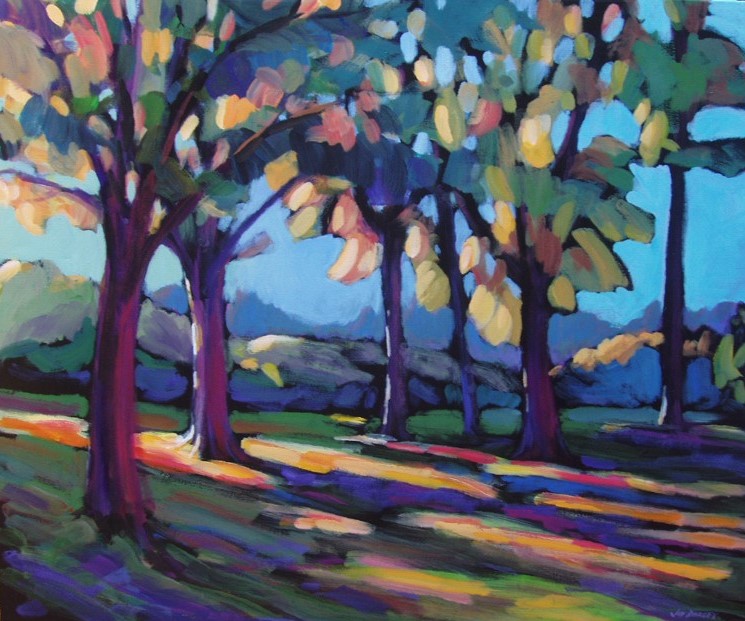 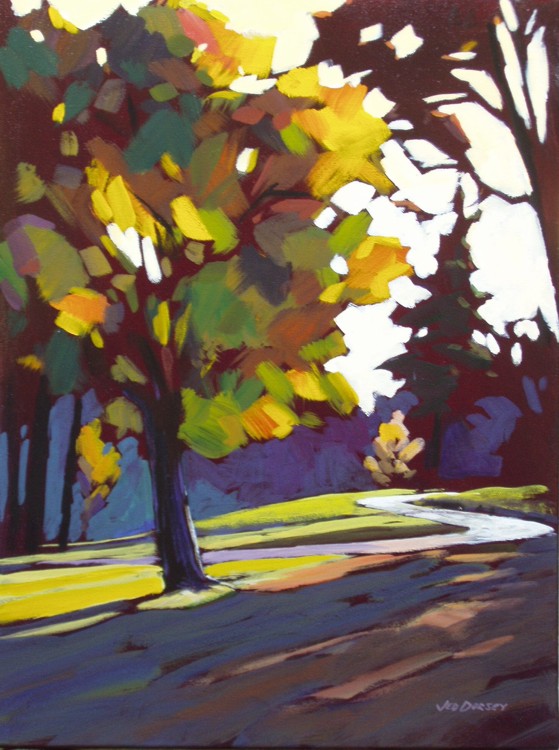 I started showing my work at Gallery in the Loft (Camano Island) in 2002. The gallery later moved to a new location on the island and became Seagrass Gallery. The owner, Doris Platis, was a big fan of my work and purchased many of my pieces for her own home. I am greatly indebted to Doris for her support and encouragement early in my career. This is one of the pieces she purchased.

Clearly this painting was done after I started adding more nuance to my work through the use of grays. 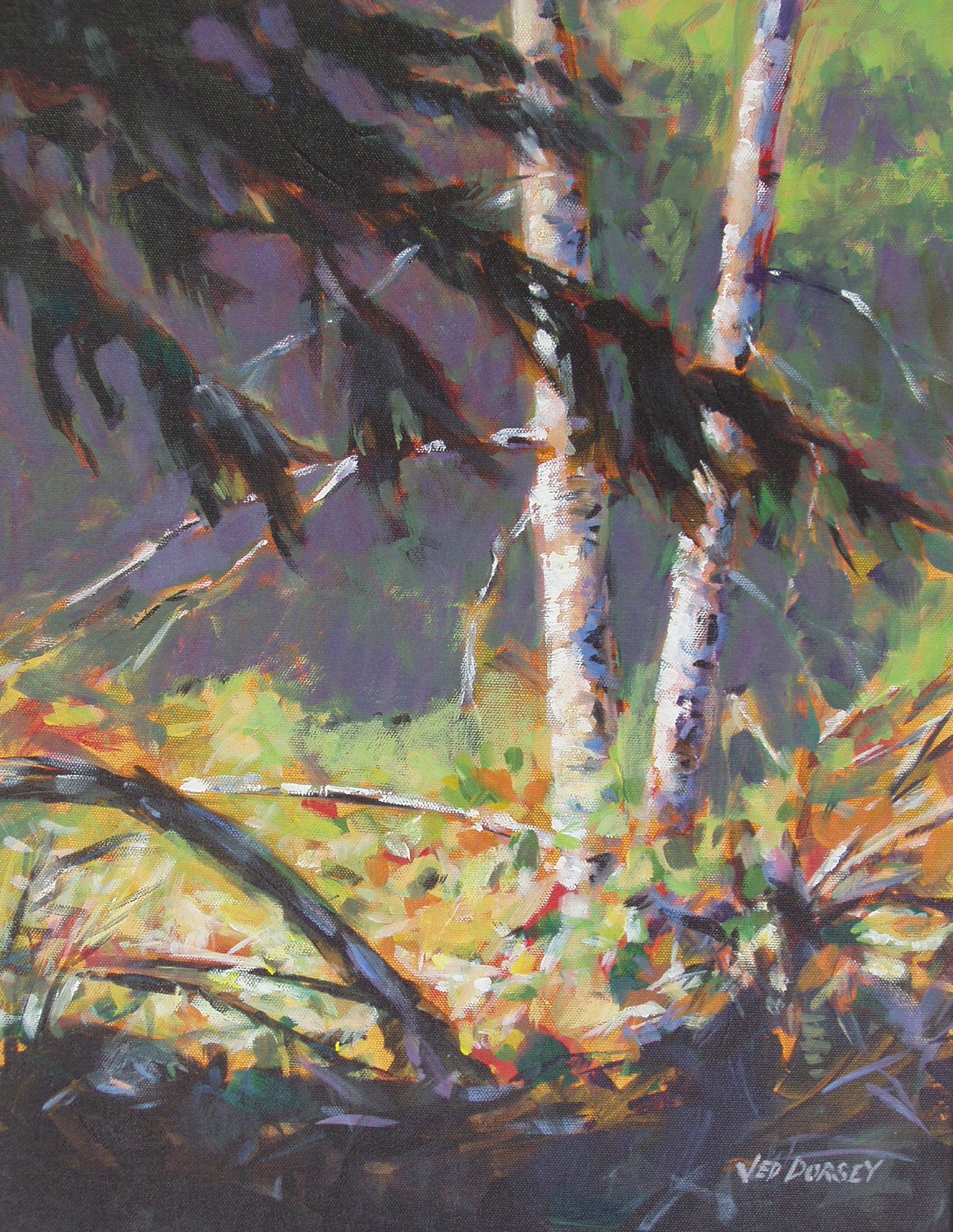 When we lived in Vancouver, some of our friends were going to be moving away and commissioned me to paint something as a memory of the city. The painting below captures a view looking down on Vancouver from one of the nearby mountains.

Some other early paintings... 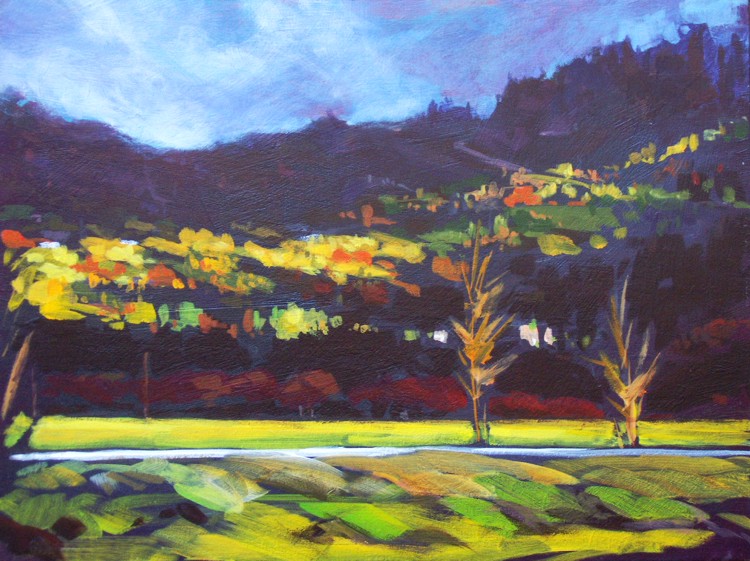 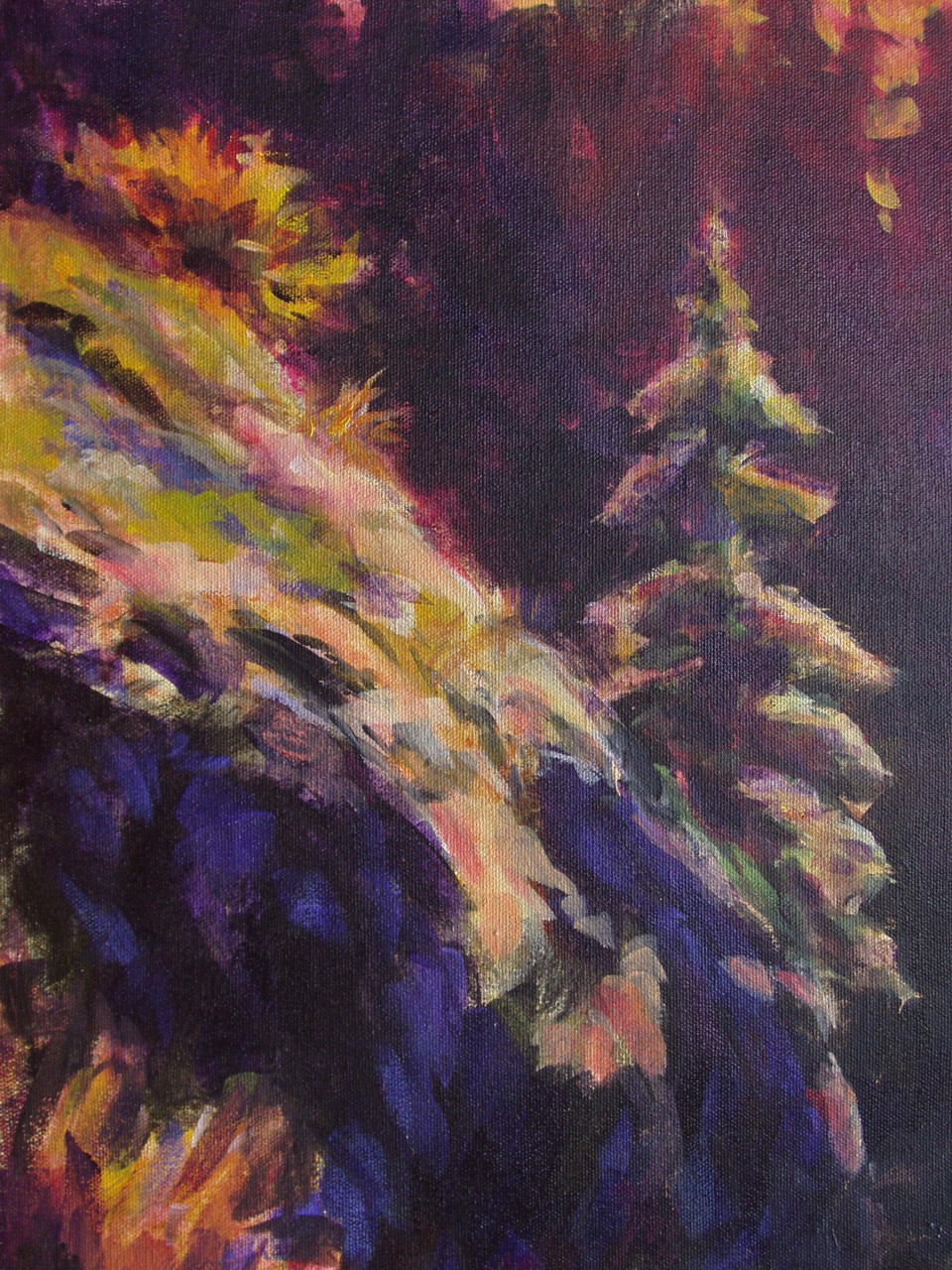 It is so helpful to look at earlier work as artists because over time we can see how we have grown in our craft. I do like some of these earlier paintings. Others make me chuckle a bit. There were so many years where I was experimenting. Early on, I even went through a phase of using spray paint and using masking tape to shape my design. I am so thankful that Renae and I went into that gallery in Whistler on a pretty ordinary day and discovered the vibrancy of acrylics. I will never turn back.